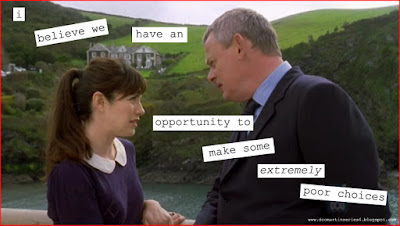 What is it about Doc Martin that got you hooked and kept you coming back for more?

I, for one, must admit that I am not a Clunatic. I’m more of a Lounatic.

I watched Series One and Two as a casual viewer and really enjoyed it. I loved the comedy, the scenery, the community, the Doc’s gruffness (who hasn’t wanted to be that honest?!) and of course the romance, which had me wondering what on earth Louisa saw in Martin – admittedly, they both have unique ears.

It wasn’t until the On The Edge special (which many were quick to dismiss as below par on the surface of things) and Series Three, that I became fascinated by Louisa, her motivations and her back-story. It seemed to me she was actually a far more lonely and isolated character than the Doc – because she cared. She appeared to be someone very much alone in the world.

I was intrigued by Louisa’s slightly relentless pursuit of the Doc, despite the fact he was clearly an irritant for her. That being said, there were also some striking similarities between them – they were both fending for themselves, insecure and she was every bit as intolerant as he was (she didn’t even really like her own friends).

Louisa was also such an accessible character – so beautifully flawed, relatable, insecure, messy, driven, looking for approval, and unsure of herself, her mind and her feelings. Not to mention the fact that Rose Cottage was an enviably gorgeous home, complete with Smeg fridge!

As each series progressed it became clear that Louisa had abandonment issues (literal and metaphorical). She was repeatedly abandoned and let down by both her parents and on several occasions, she herself did the bolt when the going got tough with Martin. If she left him first, he couldn’t leave her.

When Series Three ended with a non-wedding, they had me hook, line and sinker. When Series Three was done and dusted, I wrote my first fanfic (I’m not a fan of that term, I don’t know why) in order to sort out my thoughts about the whole sorry state of affairs. Wanting an audience for it, I created the Doc Martin Series 4 blog (docmartinseries4.blogspot.com). It was a far different beast to what this blog has become today, but it was useful.

It excites me, therefore, (as much as television can excite one) that Louisa’s issues are going to be addressed in this series. I look forward to seeing her deal with her own shortcomings. I look forward to the Doc dealing with her, dealing with her issues. I also look forward to the grumpy bugger being rude to his patients, hitting his head and looking after his son. I know it’s asking a lot, but fingers are crossed for a few moments of love, tenderness, care and kindness between Martin and Louisa too! Bring it on!

So that was my hook. Feel free to share your hook in the comments while you eagerly await Episode One of Series Seven!
Posted by Hod at 17:50