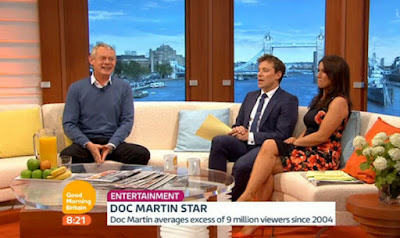 MARTIN CLUNES has spoken about the moment he was approached by Hollywood actress Sigourney Weaver and asked for a part in his ITV drama Doc Martin.


"I met her on the Jonathan Ross show and she said she was a big fan," the 53-year-old star told hosts Susanna Reid and Ben Shephard on Good Morning Britain today.

He said that his wife and Doc Martin producer Philippa Braithwaite then wrote some scenes for the Alien star.


The 65-year-old actress stars as an American tourist who pays a visit to the sleepy Cornish seaside village of Portwenn and encounters some of its colourful residents, including the curmudgeonly Doc Martin.

"She gets to be insulted by her own friend," Martin revealed about Sigourney's upcoming appearance.


Keep reading HERE at The Express.
Posted by Hod at 20:52