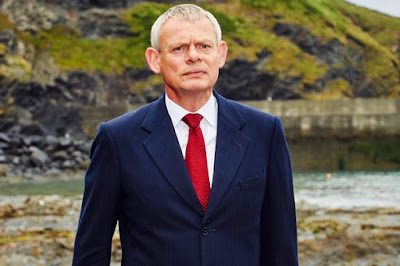 Last week in my review of Doc Martin I commented on how the quaint comedy drama is a consistent ratings winner for ITV. Whilst the series seven opener did indeed win that evening’s slot, it was down two million on the first episode of series six back in 2013. It seems odd to me that the ratings dipped quite so dramatically and unless the same audience decided to watch the documentary about The Queen on BBC One then it appears that people may have tired of Doc Martin. Indeed, tonight’s episode does follow the format of most of Doc Martin’s prior episodes and my suspicion is that people are switching off due to the formulaic nature of the show.

I did find this week’s Doc Martin particularly muddled with five storylines occurring throughout the episode three of which intersected with the instalment’s only memorable set piece. The big news this week was the return of Louisa who came back from Spain at possibly the most inopportune time. After settling back in, Louisa reveals that she needs to create some space between her and Martin, making the eventual decision to move out. I personally felt that Martin and Louisa’s separation should have had more time devoted to it even if it was only temporary. Indeed, as it seemed that the split was being rushed, I thought that in the end Louisa would decide not to make the move and try to work at her marriage. There were at least a few little hints that Louisa and Martin would resolve their differences however ultimately it seems that the writers are going to keep them apart for now.


Keep reading HERE at Unreality TV.
Posted by Hod at 20:44