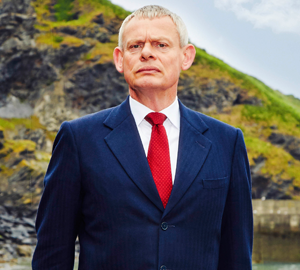 Back after a two-year break, Doc Martin is one of TV’s best-loved shows and picks up the story where it left off last season with the grumpy medic, played by Martin Clunes, estranged from his new wife Louisa (Caroline Catz) who has fled Portwenn to visit her mother in Spain, taking their son James Henry with her.

As series seven opens she’s still away and Dr Ellingham is rattling about at home alone like the proverbial bear with a sore head. Determined to win her back, he enlists the services of a therapist in order to address his personality problems so the scene is set for all sorts of twists and turns as Martin Clunes reveals…

What can you tell us about the doc and Louisa?He feels he needs to make a change in himself in order to make it work for Louisa because he thinks that might be what she wants, so he’s volunteered for therapy which is a massive step. When he talks about his tragic background, about being an unwanted child, it’s heartbreaking, but in the fictional context it’s quite funny! I just like punishing him.

Would you like Martin and Louisa to be happy for a while?I don’t think it would be very interesting to watch.

How have fans reacted to their break up?They’re furious, particularly Americans, who are so vocal. They meet and have discussion groups about each episode and we get notes and queries.

Do you feel you owe it to fans to give them a happy ending?We sort of owe it to the fans to… ignore them! We listen, but we know when they’re wrong. People send us storylines but we’ve stopped opening them because the next thing is they try and sue you for stealing their idea. They always come with a letter saying, ‘I know my rights’.