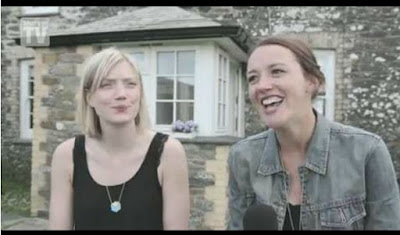 The Doc’s marriage to Louisa may be on the rocks when we return to the fictional Cornish village of Portwenn this year. However, love is in the air for favourites Al Large and Morwenna Newcross.
PC Joe Penhale, meanwhile, has his head turned by newcomer, Janice.

Best pals on and off screen, Robyn Addison (Janice) and Jessica Ransom (Morwenna), explained more when we caught with them on the Doc Martin set earlier this year.

Jessica Ransom, who plays the doctor’s receptionist, reveals: “Morwenna is now living with Janice, as opposed to Al (Joe Absolom), which was a disaster in the last series. But there’s still a little spark between them!”

She adds: “Morwenna hasn’t yet been fired for surliness in relation to the Doc’s grumpiness!
“Morwenna starts to do some operations, which is quite exciting! She manages to save someone’s life on a lifeboat in the first episode – with her friend Janice, who isn’t as medically astute!

“Later in the series Morwenna reads a book about assertiveness. She feels she needs to have a pay rise because she’s doing all these operations, running the show, and stopping the patients from complaining to the NHS about Martin’s excessive grumpiness!”

New addition, Robyn, explained how her character, Janice, comes to be involved in village life in the seventh series: “Janice doesn’t have a job so Morwenna sets her up to be the Ellingham’s new nanny. They didn’t have much choice - it was Janice or no one!”

Adding: “Janice is a very vain individual and that vanity can lead to some disastrous childcare!”
Despite Janice’s cavalier attitude to babysitting, she impresses local Pc Penhale. Robyn reveals: “Janice knows from day one Penhale’s interested in her. He follows her around like a puppy dog… to begin with she just likes having someone like her. But the thought of him maybe leaving (SPOILER ALERT!) causes her to reassess…”

Love also blossoms for slow-burners Al and Morwenna, explains Jessica: “All the way through there’s lots of really nice stuff with Joe and Morwenna being kind to each other and having lots of nice smiles across the room. By the end we’re left feeling like they could be more than just friends. They’ve got over the embarrassing, awkward, almost-date they had at the end of the last series.”


Watch the video HERE for the full interview.