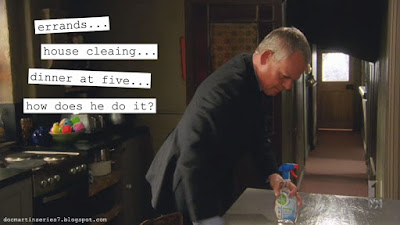 Doc Martin is as grumpy as ever with his patients, but he is trying to turn over a new leaf to save his marriage according to Martin Clunes.

At the end of the last series it was all off between the Doc and Louisa. Louisa just wanted space away from him.

Martin explains: “Their relationship really deteriorated. It left him sort of broken. So at the start of this series Louisa is with her mother in Spain, and he’s living this solitary life, miserable, but aware enough that if he wants to fix things he’s got to make a change.

“So he asks his Aunt Ruth for help. She tells him it would be unethical for her to treat him as he is her nephew, but puts him in touch with a psychotherapist, who is extremely bright and very young, and he starts going to see her.

“So he is making a conscious effort to try and bring about some change in himself, that might mean he can have a proper relationship with Louisa when she comes back.”

But when Louisa returns from Spain with James Henry things are still very awkward between her and the Doc. He continues with the therapy sessions with Dr Rachel Timoney, and as they progress the therapist says she’d like to meet Louisa.

“Almost without realising they start attending couples’ therapy which is as revealing about her as it is about him. It becomes apparent that Louisa does have some changes to make in her life too.

“He’s prepared to do anything to save their relationship.He is quite diligent about them doing the various exercises they are given as a couple by the therapist. As it progresses and doesn’t seem to be making much impact on them, the therapist says sometimes it is as important to break up well, as it is to stay together well. They both freak at the prospect that this could be the end.

“So we will still be keeping the audience guessing about what happens to them.”

The Doc hasn’t changed his grumpy attitude to his patients, however. “He still finds his patients as infuriating as ever,” Martin says.

And as for the little dog Buddy, who has faithfully followed him around the village, his days may be numbered. The Doc hates him, and in this series he decides enough is enough.

“The Doc has always hated the dog, but it reaches a crescendo in episode five where the Doc first of all asks if a vet can be found to put Buddy down, and then decides to do it himself. Louisa and Morwenna stop him from doing it.”

Caroline Quentin is a guest star in that episode, playing the part of Angela Sim, an holistic vet, and daughter of the previous GP. It is the first time they have worked together for 17 years since Men Behaving Badly.

Angela takes on Buddy to save him from the Doc. She charges the doc £94 to rehome Buddy, but he just keeps running away and coming back to the Doc.

“It was joyous to work with Caroline again. I see Caroline all the time because we are friends, and family friends. She stayed with us in the house in Cornwall that we rent during filming.

“When we usually meet we both have our families with us and it becomes a larger thing. But with just Caroline and I together, I laughed like an idiot, the pair of us just laughed like children.

“She is so brilliant. She played her role perfectly, and is terribly funny, and completely plausible.It was very funny to see the reaction after she had self medicated with animal medicine when we did a scene on the beach.

Martin says it is not out of choice that he and Caroline haven’t worked together for 17 years.

“Nobody has asked us to work together. This part was written for her. There was nobody else.

‘If we are ever lucky enough to get to make another series her character could return.There is an historical link because her character’s father was the previous GP, the late great Jim Sim.”

Martin’s real life relationship with Dodger, the dog who plays Buddy, is far different from the on screen ‘partnership’.

“Everything is about play and reward with dogs, and if I have to keep him following me and interested in me, I have to keep playing with him. It has been so lovely having him around so much. He is so well trained by Sonia (Turner) it is effortless. If somebody doesn’t like a dog, to me that is funny.

“Dodger always hits his mark. We seldom go again for another take with Dodger.”Martin’s own canine family is often around when he is filming in Cornwall. James Henry the Jack Russell who starred with him in the recent drama series Arthur & George, can’t resist the limelight.

“Jimmy sits in his basket in the surgery while we are shooting. He wanders onto the set, but he is generally out of frame because we don’t shoot ankles much. It is proven that dogs in the workplace lower the blood pressure.”

Martin relished being back in Cornwall to film the eight episodes over four months.

“It has been the happiest of times, which sounds a boring and gushing lovie thing to say,because it has always been a happy time. But there was something about it even before we came down that made me really look forward to coming down to Port Isaac.

The crowds who came to watch the filming in the tiny village this year were bigger than ever, turning the narrow streets into live theatre.

“Huge numbers of people turn up to watch us. I have never felt self conscious filming out there in the way that I do in other places. For some reason down there it doesn’t bother me.

“It is like live theatre, but I imagine the crowds cannot hear a word because we are not projecting, we are acting for the camera.

“I think our American viewers are more vocal and excited. They are beside themselves when they watch the filming.”

One dedicated group of fans who follow the filming have called themselves the ‘Clunatics'. They have showered Martin and his family and the production with presents to show their appreciation.

“They are a group of Doc Martin fans who keep thanking us for helping them to make great friendships around the world with other fans. They Skype each other. When episodes go out they have discussions on it, and when there are no episodes going out they start again and have discussions.

“There is one woman logging the process of my ties; she says ‘I don’t think I have seen this tie since season two, mind you I haven’t logged all the season six ties yet’.

“We’ve had so many presents; paintings of myself and cast members, a fridge magnet of Jimmy, my Jack Russell, paintings of my horses. A lady from Iceland hand knitted a sweater for me, one for Emily and one for Philippa, and one for Brian the props man because he was nice to her in the pub one night.

“ We were given a big jar of M&Ms with DM printed on each one of them for us all. Some of the Clunatics even found us when we were filming on the Moors.

“When we started making Doc Martin we could never have imagined it would have this reaction. Our first customers are ITV audiences, and always have been. That’s who we make it for, and the rest is a bonus. But we never anticipated this. You can’t predict how successful something is going to be.

Martin thinks it may have been a ‘Clunatic’ who was responsible for him being awarded an OBE recently.

“They found out what to do and started writing. I found out since from the charities I
support that they had been approached.”

When the envelope containing the announcement of the award arrived in the post Martin admits he feared it was a speeding ticket.

“The OBE is a tremendous honour, but when it arrived in the post I did think it was a speeding ticket. It had an official stamp with an emblem on the envelope and I thought ‘oh no not again’ and I passed it to my wife Philippa to open.

“She said ‘ you have an OBE’. I love the fact - I’d be delighted to have an OBE for anything, services to drama, services to charity, but services to the Dorset community, that excites me most about it because it defines who I am, living in Dorset.

“So if I can be acknowledged for contributing to that, then I am glad because I am very grateful to Dorset. That is the bit that makes me most proud, the rest is sort of doing my job. I am chuffed to bits. I can’t wait to go to the Palace. We knew six weeks before it was announced but we couldn’t say anything to anybody. I thought they’d take it away if we blabbed.”

After the last series of Doc Martin, Martin played Sir Arthur Conan Doyle in the ITV drama series Arthur & George, and filmed a docmentary for ITV, Man and Beast.
Posted by Hod at 08:00