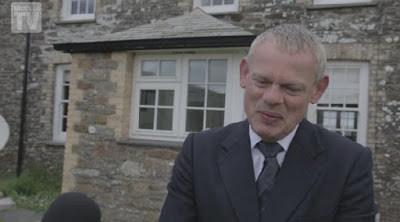 Martin Clunes has revealed what keeps bringing him back to his most famous role, as the grumpy, blood-phobic GP star of ITV's Doc Martin: “I love trying to punish this awful man in various ways!"

Martin told What's on TV exclusively on set in Cornwall: “I love and I hate him. I slightly envy his liberty sometimes. He’s a fun space to inhabit... If this was the only thing I did for the rest of my life I’d be really happy!”

He said: “It was just heaven. She’s my best friend. We had so much fun all those years ago. We’ve always been close… Caroline only lives an hour from us in Devon.”

Martin added his other Men Behaving Badly co-star, Neil Morrissey, had a few things to say about Caroline and Martin’s on-screen reunion: “Neil wanted to know where his part was!”

He revealed there’s trouble in store for Doc Martin and his wife, Louisa, when the new series gets under way: “Their relationship was really grim when we last saw them. There is a conscious effort, initialised by the doctor, to fix things and resolve their relationship that involves a little therapy…

Throughout the series they’re both in and out of therapy to see whether or not there’s a future in their relationship.”

He added: “The scripts this year are rock solid. I think the best we’ve ever had. There’s loads for everyone to do – Bert’s bankruptcy, Al’s new business, Ruth’s illness, and romances here and there. They all punch their own weight.”

The new series of Doc Martin begins on ITV on Monday, September 7 at 9pm.


Follow the link HERE to view a video interview with Mr Clunes at What's on TV.
Posted by Hod at 21:02