Caroline Catz: 'Even though Louisa and Doc Martin love each other it may not be sensible to have a relationship' 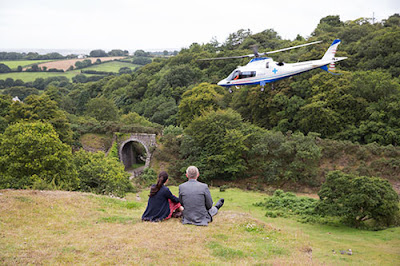 Caroline Catz reveals it’s make or break time for Doc Martin and Louisa in the final episode of the Cornish comedy-drama on Monday.

Caroline, who plays Louisa, told What's on TV: “Louisa and the Doc (Martin Clunes) have been on big journey in their relationship during this series. Then, true to Doc Martin, there’s a mad, interesting and insane situation that takes them on this other journey!”

What’s on TV can reveal things take an unexpected turn in the Ellingham’s relationship when Mrs Annie Winton, played by Gemma Jones, kidnaps the Doc!

The Doc’s priorities quickly change from his relationship to survival when a house call to Annie Winton (Gemma) turns nasty. Terrified of husband Jim dying from his malignant tumour Annie demands Doc treats Jim at home so he doesn’t have to go to hospital.

Meanwhile, Louisa is left wondering why her estranged husband hasn’t turned up for their make-or-break dinner…

But while everyone else thinks the Doc has done a runner, Louisa isn’t so sure. She enlists the help of Pc Penhale (John Marquez) and retraces Martin’s steps to the Winton farm, where Annie’s got her gun!

Will it be curtains for the couple, one way or the other?

Caroline explained: ‘Martin has this great integrity. He’s a real anti-hero in a way, and has his own quirky charisma, which Louisa loves.

“She puts up with him because he’s a kind, considerate person who finds it really difficult to express himself. But even though they love each other it may not be sensible for them to have a relationship.”

The final episode of Doc Martin screens on ITV, Monday, November 2 at 9pm.