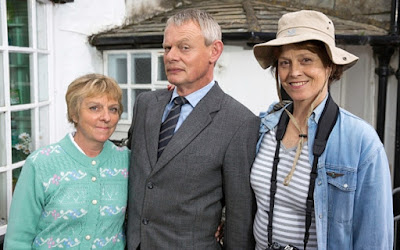 How did A-list actor Sigourney Weaver end up spending the summer in Cornwall filming with Martin Clunes?

It’s the quintessential gentle British comedy-drama, filmed on location in Cornwall in the village of Port Isaac and full of local colour and characters, which is why viewers of ITV’s Doc Martin, may be left rubbing their eyes at the sight of A-lister Sigourney Weaver fetching up as an assertive, argumentative tourist for a surprise guest appearance alongside Martin Clunes in tomorrow’s episode.

The key to this unlikely cameo is Selina Cadell, the jobbing English actress who plays the role of Doc Martin’s village pharmacist Sally Tishell – who also happens to be Sigourney’s best friend of 42 years. Instrumental in persuading her world-famous buddy to join the cast she laughs: “You can’t imagine many American stars fitting into Doc Martin; and the great worry at first was, 'Will she need a trailer?’


Keep reading HERE at The Telegraph.
Posted by Hod at 21:56