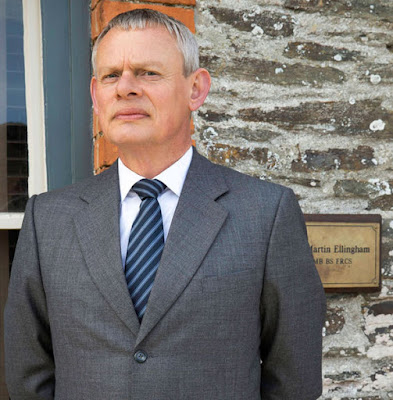 THE irascible, hilarious GP of fictional Portwenn has commanded his surgery for many years, but this current series is the funniest yet.


Doc Martin (ITV, Monday) is, yes, a drama, but Martin Clunes’ brilliantly crafted comic performance as Doctor Ellingham is surely worthy of a BAFTA. The show also needs some recognition from the British Medical Association for services to obscure diseases.

In last week’s episode the range of ailments/conditions was both baffling and incredible. Top of the list was Kawasaki Disease, which apparently is not what happens to someone who rides on the back of a motorbike for the first time. As we now know, it strikes Cornish children who can collapse without warning as they are taking in a wonderful sea view while trying to learn how far Saturn is from the Sun.

If Kawasaki didn’t do it for you, with Doc Martin shouting “Get out of my way!” as he knocked the poor child on to his back and made a mad dash to the hospital with his estranged, we also had the more mundane but no less entertaining asthma combined with double leg failure, varicose veins, an unsightly ganglion and a profusely bleeding man with his child’s fishing hook skewered through his thumb.

All of the above was watched over by an attentive work experience teenager who was a splendid mini-me Doc Martin, and appeared to know just as much as our favourite medic acquired by reading weighty drug manuals and wrongly treating his mother with pocketfuls of Beta blockers. Welcome to the NHS of the future!


Found HERE at The Sunday Express.
Posted by Hod at 08:24