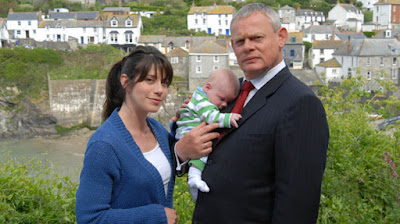 Doc Martin is back on Monday October 19 after a break for the Rugby World Cup, as poor Martin and Louisa continue to struggle with their marital problems.

Dr Timoney suggest the couple go back to the beginning of their relationship and try to remember what they first loved in each other by planning a date, but their busy lives – and James Henry’s first birthday party – seem to get in the way.

And there’s something else that gets in the way too: Louisa’s ex boyfriend Danny (Tristan Sturrock) suddenly pops up, when he turns up on a camping trip with seven children, planning to stay on Ruth’s farm.

They need some local children to show them round – and Louisa feels obliged to help out her former flame out, even though this is the last thing she needs just now.

And things get even more troubling with Danny sticks his oar in and tries to help Louisa and Martin to work through their marital issues. Uh oh...

It's not just Martin and Louisa having problems this week though. Things are going rather well for Clive and Mrs Tishell after their reunion, until she invites him back into the bedroom, with disastrous consequences!

Throw in a missing child, PC Penhale’s furious discovery of Bert’s unlicensed whisky venture, and a health scare at James’s party, and you can expect another hilarious episode of Doc Martin.

Tune in at 9pm on Monday October 19 to see the next episode of Doc Martin on STV.