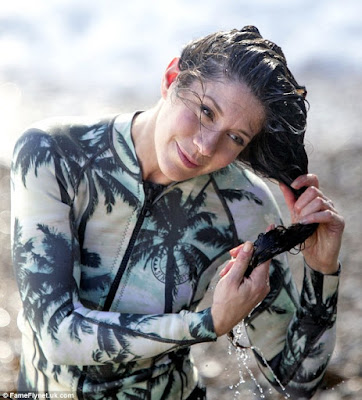 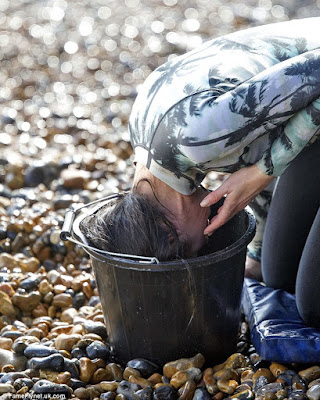 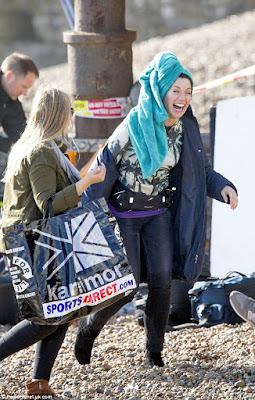 She's in the middle of filming a brand new season of much-loved British comedy-drama Doc Martin.

And it looked as though Caroline Catz wasn't going to be forgetting her Tuesday on set in a hurry as the star shot some chilly scenes on Brighton Beach.

Despite the harrowing temperatures along the British coastline, the 45-year-old star was seen dipping her head into a bucket of cold water as the cameras rolled.

Attempting to shield herself from the cold, the actress sported a palm print wet suit top, skinny jeans and knee-high black boots.

Though her chilly ordeal clearly called for an extra layer as a female companion was seen helping the British star cover up beneath a long blue puffer jacket, while her wet brunette locks were wrapped into a towel.

Fortunately, Caroline appeared to see the funny side as she laughed incessantly while walking along the pebbled beach.

Before her damp tresses were hidden beneath a towel, Caroline was sure to set tongues wagging as she leaned over and ran her fingers through the ends of her hair.

Meanwhile, the mother-of-two previously opened up about her role on the popular TV series, and insisted that it's one of the best projects she's ever done.

'There is no reason in the world not to do this job. It’s too good and too much fun not to,’ she told You magazine in September.

Continuing to gush about the show, the star said: 'For me, one of the appeals of Doc Martin is that it inhabits an entirely credible make-believe world with its own rules, sense of time, space and even fashion.

‘It’s a bit like Narnia, or even at times The Prisoner! There’s this amazing, expansive landscape, which feels so free and open, yet you’re constantly drawn back to the epicentre of the village, where you can’t even blow your nose without everyone knowing about it. And you can’t get away, no matter how hard you try,’ she continued.
Found HERE at The Daily Mail (with more photos!).
Posted by Hod at 06:23