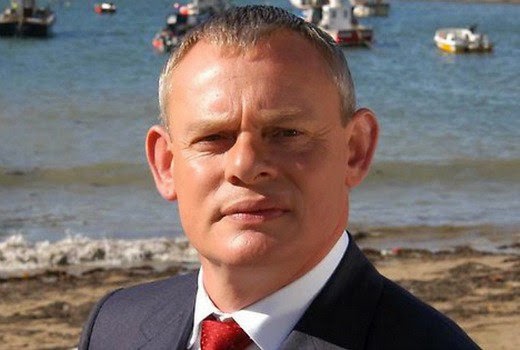 Grumpy medico Doc Martin is returning for a seventh season.

ITV has ordered 8 new episodes with Martin Clunes reprises his role as Dr. Martin Ellingham, the GP with a brusque bedside manner and a phobia of blood. Filming has just begun in Cornwall with all regular cast returning.

Next season The Doc is heartbroken by Louisa’s departure, and realises he has got to make changes if he wants to win them back, and be a family again.

“I’m thrilled to be back on the beautiful North Cornish coast to shoot series seven of Doc Martin. The Doc has some serious work to do if he is going to persuade Louisa to come back,” Clunes said.
More than 800 local people turned up for auditions in Port Isaac for extras roles in the new series earlier this month. As the doors of the church hall opened for the auditions there was a queue of 150 babies in prams and pushchairs hoping to be selected for the role of 11-month-old James Henry, the son of Doc Martin and Louisa.

“We’re delighted Doc Martin is returning to ITV,” said Steve November. “Martin has created a unique and very watchable character who for all his faults is hugely appreciated by the audience. We look forward to working on the series with the Buffalo Pictures production team.”

It airs in Australia on ABC.