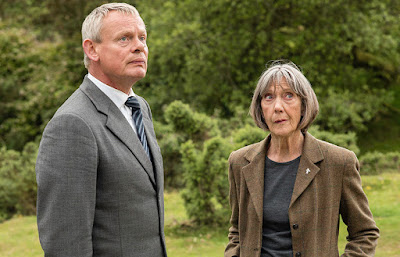 Doc Martin, "Rescue Me" and "The Shock of the New" (available Monday, Oct. 5, on Acorn TV)

Stuck in Portwenn, the quaint seaside town he considers "the village of the idiots," with his wife off in Spain (with baby son) to get some distance to sort out their relationship, is it any wonder that Doc Martin's (Martin Clunes) bedside manner is particularly gruff? His bark has more bite than usual as Season 7 of the gently comedic drama gets underway. (The first two episodes of the popular British import are available Monday exclusively on the Acorn streaming service, with the remaining six episodes rolled out on successive Mondays. In January, American Public Television will distribute the episodes to local PBS stations.)

With the doc's strained love life the #1 topic for local gossip, Martin decides to take the plunge and see a therapist, a task from which his equally prickly Aunt Ruth (the wonderful Eileen Atkins) wisely recuses herself. She's a silent partner (but "not dumb," she snaps) in the B&B that bumbling Al Large (Joe Absolom) is frantically trying to get ready for customers. As luck would have it, two of Al's workers become patients of Doc Martin, who's distracted by being unable to reach the absent Louisa (Caroline Catz) on her retreat.