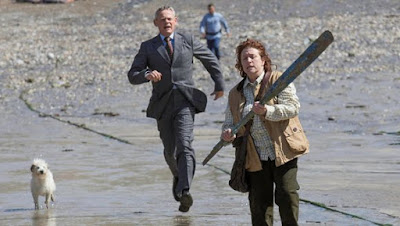 This is the episode that Men Behaving Badly fans have been eagerly awaiting: the reunion of Martin Clunes and Caroline Quentin. She plays slightly batty animal-sanctuary owner Angela who takes in Buddy, the scruffy stray dog that’s been hounding (sorry) Martin. According to her, Buddy said he’s keeping the doc company because he knows he’s lonely.

“She’s completely deranged, but she should be back to her normal self in the morning – slightly deranged,” is Martin’s diagnosis. The role certainly gives Quentin the chance to go crazy. Meanwhile, Joe is making puppy dog eyes at Janice – actually he looks at her in much the same way Buddy looks at Martin.

5/8. After reaching breaking point with being followed around by Buddy, Martin resolves to find a vet to have it put down, while Ruth finds out that Bert has been trying to make his own whisky. Clive is suspicious of Mrs Tishell and who she might be cooking meals for, Penhale makes a hash of asking Janice out, and Louisa and Martin's therapy homework results in a picnic on the beach, where they are interrupted by local vet Angela Sim - who appears to be hallucinating. Comedy drama, guest starring Caroline Quentin.