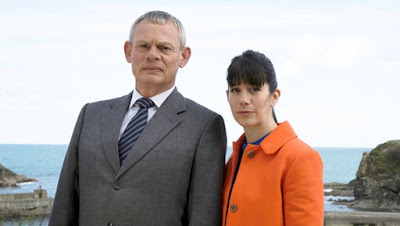 I’m not sure that Dr Ellingham needed to do all those years of medical training. I’ve done absolutely none and I can usually diagnose what’s wrong with his patients before he does. Perhaps he’s a bit preoccupied, what with Louisa’s old flame Danny arriving in Portwenn with a coach-load of disadvantaged kids for a camping trip. Surprisingly for such an emotionally stunted person, Martin seems to be a teensy bit jealous when Danny starts flirting with “Lou”.

Meanwhile down at the pharmacy Clive is getting anxious about his marital duties and, as the Doc won’t help him with “some of them little blue pills”, he decides to self-medicate. That’s never a good idea, Clive. Look at what happened to Caroline Quentin’s veterinary character. She went barking mad – almost literally.

6/8. Louisa helps out her ex-boyfriend Danny when he brings seven children from London to camp on Ruth's farm - supervised by Al and Bert - while she and Martin plan a date on the advice of Dr Timoney. However, their night at the restaurant is interrupted when Danny calls saying one of the youngsters has gone missing. Things get worse for the couple when Martin uncovers a health scare at James's first birthday party that makes all the guests leave very quickly. Comedy drama, starring Martin Clunes and Caroline Catz.

Found updated HERE at RadioTimes.
Posted by Hod at 21:15