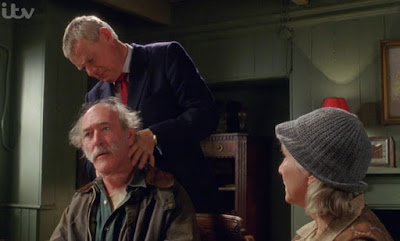 I had a coffee this morning with charming Hungerford actor Nicholas Lumley to find out what his experience was like acting in the popular Doc Martin series with Martin Clunes.

“The casting call was for an eccentric old farmer with an accent based loosely in the West country. At the audition the director told me just to ‘talk pirate’. I was delighted to get the part, as there is always lots of competition.

I don’t know if you’ve noticed but the sun always shines in Doc Martin. This is deliberate – any grey skies are edited out in post-production. This creates a holiday destination atmosphere on set even when it is wet and windy filming.

Caroline and I had a lovely stay for four days in The Slipway Hotel in Port Isaac opposite the harbour. The hotel is always in the episodes, besides Mrs Tickle chemist shop – which in real life is a sweety gift shop that sells Doc Martin souvenirs. Most of the filming takes place at a farm near the town.

I was asked if I minded having the caravan on the farm as a dressing room. It wasn’t very big but Sigourney Weaver had used it the week before…(she had met Martin on a chat show and asked to be in the series which is very popular in the States). The doctor surgery and most of the interiors have been constructed in a large barn on this farm.

I have long been a fan of Martin Clunes so it was a delight to meet him. He came and introduced himself when I was in make-up having my prosthetic goitre put on (which took an hour). Despite his on-screen grumpy character, Martin is always charming and funny.