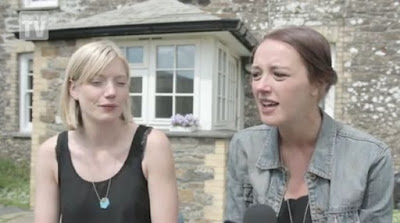 Next time you're watching Doc Martin, pay close attention to the patients' names because the cast have created a punning name game that keeps them amused on set.

Jessica Ransom told What's on TV: "We always put in funny patient names, we've had a lot of good fun putting a few of those in. We had a nice old lady the other day who was Alice Cooper... Oh, Germain Mann that was a good one!"

"I've got a list, last series I made a list which was in my reception book on the desk and it mysteriously disappeared between the last series and this series, so I've had to start my list again."
Robyn Addison (Janice) added: "We had a whole conversation at dinner during filming..."

Jessica said: "Once you start playing the game of Funny Patient Names nobody really speaks... So I've got a new book, so I might have to take it with me so it doesn't get stolen because we've still got to get in Paul Mycock and Theresa Green for example. There's plenty more up my sleeves."

Read more and WATCH THE VIDEO HERE.
Posted by Hod at 08:35