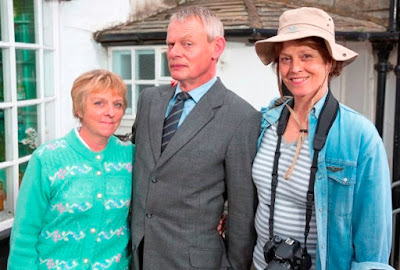 As with most picturesque Cornish seaside towns, Portwenn is no stranger to visitors. Over the past few years, the fishing village which Martin Ellingham calls home has welcomed the likes of Ben Miller, Chris O'dowd and most recently Caroline Quentin.

However, even the busy streets of Portwenn real-life alter-ego, Port Isaac, have probably never witnessed such a throng of stars. Not only do British talent Kelly Adams (Mr Selfridge) and Gemma Jones (Bridget Jones' Diary) grace the narrow streets tonight, there is also a cameo role from Hollywood A-lister Sigourney Weaver (Aliens). Doc Martin star Martin Clunes revealed that Weaver was a big fan of the comedy drama and jumped at the chance of featuring in some small way. Tonight she briefly plays an American tourist who bumps into the grumpy medic. It's no wonder he's in that mood either.

The doctor and Louisa (Caroline Catz) receive an intriguing invitation from Dr Timoney (Emily Bevan) to attend additional therapy sessions. This aspect of the current series has provided laughs and insightful moment in abundance, and it is pleasing to realise the cast have enjoyed those scenes as much as we have.

Catz revealed: "You really do feel like you are in the session, and you go to the heart of what Dr Timoney is trying to tease out of both of them and you can see how difficult it is for them to deal with it. It is putting them in extreme and uncomfortable situations which makes it feel fresh."
For once though, it seems Dr Timoney may be on the receiving end of assistance when she is involved in a car accident outside the school. Inside the building there is trouble of a different kind when the new art teacher (guest-star Adams) angers Louisa with her rather unorthodox methods.