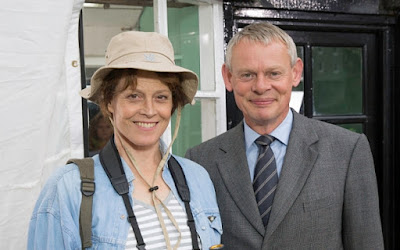 The cosy and sometimes idyllic world of Doc Martin (ITV) often throws up peculiar scenarios, none more so than a cameo appearance by the star of the Alien film franchise, Sigourney Weaver. Playing an American tourist searching for her family roots in Cornwall, and for a prescription-only medicine from the local chemist, her encounter with Dr Martin Ellingham (Martin Clunes) in the latest episode wasn’t so much enigmatic as evanescent – and verged on the bizarre.

She appeared from nowhere, announced her name, Beth Traywick, to pharmacist Mrs Tishell (to which Mrs T, somewhat bafflingly in the circumstances, replied: “Yes, I know”) and proceeded to act out the sort of clichés of transatlantic boorishness that we haven’t really associated with American tourists since the Seventies. Sadly, Beth’s medical complaint didn’t involve anything as eye-catchingly dramatic as an evil alien parasite living in her gut. It was mild asthma instead, and after another pointlessly waspish encounter with the Doc she was gone. We can only hope her donation of a book on radical feminism to receptionist Morwenna (Jessica Ransom) might yet prove fruitful.

Apart from that, the episode wended its whimsical way with typical aplomb. The story was bracketed by Martin and Louisa’s (Caroline Catz) encounters with their marriage counsellor, psychiatrist Dr Timoney (Emily Bevan), who herself went doolally after hurting her head in a car accident.


Keep reading HERE at the Telegraph.
Posted by Hod at 18:55