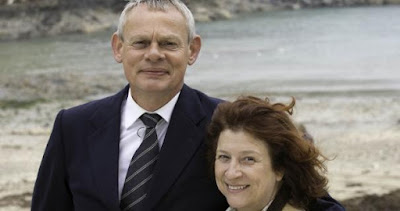 Speaking about Caroline’s guest role in Doc Martin, Martin Clunes revealed there’s a simple explanation why they haven’t worked together again until now: “Nobody has asked us to! So we’ve written the part of holistic vet Angela Sim especially for Caroline. There was nobody else.”
During Caroline’s guest outing fans of Doc Martin will see her appear as alternative vet, Angela Sim. What’s on TV can reveal during the fifth episode the Doc loses the rag because he’s being followed incessantly by stray dog Buddy and resolves to get him put down. Fortunately, the grumpy medic fails in his attempts to have Buddy annihilated so, rest assured, no dogs were harmed in the making of this episode!

Instead, the Doc turns to holistic vet Angela Sim who offers to take Buddy in – for a fee of £94! But it’s not the last the Doc sees of Buddy or Angela. The stray keeps returning and later, while on a picnic with Louisa, hippy vet Angela appears to be hallucinating and in danger…
Martin said: “Caroline is so brilliant. It was very funny to see the reaction after Angela had self-medicated with animal medicine when we did a scene on the beach. Caroline played her role perfectly, is terribly funny, and completely plausible.