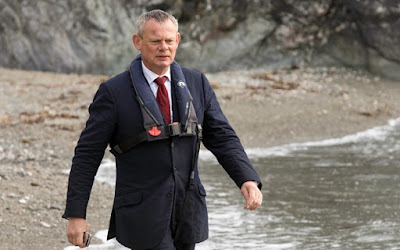 You could imagine a great collective sigh of sofas as millions of us sat down to enjoy the new series of Doc Martin (ITV), the first for a couple of years. It didn’t seem such a long time to wait for the appointment when, in the first scene, a nosy postman probed the grumpy Cornwall-based medic (Martin Clunes) for gossip, and we were transported instantly back to precisely the same place we were when we last saw him – floundering over the fact that his wife Louisa (Caroline Catz) had left him.

It is an essential part of Doc Martin’s appeal that even if the last time you caught an episode was way back in series four (2009) – or even series two (2005) – you would still have found him floundering over Louisa. The Doc loves Louisa and Louisa loves the Doc. But never the twain shall meet harmoniously. Not even now they’re married and have a son. The principal pleasure, perhaps even the whole point, of this hugely popular drama is that nothing much ever changes.

The doc, the beating heart of the show, is an emotionally challenged incomer whose goodness is sheathed in a taciturn inability to connect fully with the world. Even after six series he remains a mystery. And that’s how we like it. Here, the Doc’s opening plea to his Aunt Ruth (Eileen Atkins), a retired psychiatrist, was to help him find a therapist to who could resolve his issues. But we already know it’s not going to work.


Keep reading HERE at the Telegraph.
Posted by Hod at 18:30