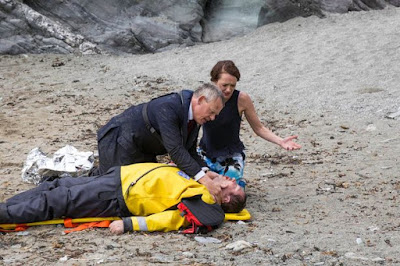 Fans of Doc Martin were left reeling at the end of the last series when the Doc’s wife Louisa took son James and went to live with her mother in Spain, leaving him behind.

Marital bliss really didn’t last that long for the pair. So in this seventh run, everything hangs in the balance.

“We’re trying to put the marriage back together and end up going to couples therapy,” says Martin Clunes, 53, who plays curmudgeonly medic Martin Ellingham.

“He’s got some serious work to do if he’s going to be able to persuade her to come back.”

Caroline Catz, 45, who plays Louisa, adds, “People always ask why she puts up with him, but she does love him... although they are probably going to drive each other mad forever more.”

The enduringly popular show, set on the stunning North Cornwall coast, saw more than 800 locals turn up to audition for roles as extras. And there was a queue of 150 babies in prams hoping for the role of little 11-month-old James!