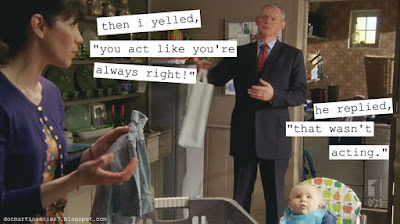 “People say to me ‘why does she put up with him’. She puts up with him because she loves him, and he’s a really kind and considerate person who finds it really difficult to express himself, “ Caroline says.

“You know he is good because you can see the way he is, and he has this great integrity. He is a real anti hero in a way, in a great way. He has his own quirky charisma which she loves.

“I think it is interesting watching these two people try and be together. They are obviously attracted to one another. It is not sensible for them to have a relationship, but they love one another and that is a really common story. You see it all over the place. How many people are perfectly matched in every way?”

The Doc seeks the help of a psychotherapist to try to solve his problems and make their marriage work. But it soon becomes clear that it is not only him who has problems, but Louisa too.

“The fun of this series for me is that they then go into couples therapy sessions, which is quite funny. Dr Timoney is a very good therapist and does get underneath what is really going on between the two of them, and I think that will be really satisfying for the audience.”

The production had worked with a real couples therapist, who had studied the characters and the dynamic between them, before writing the scripts.

“What we learn from this series is that they are probably going to drive each other mad for ever more. They do love each other very much. They go on a big journey in their relationship and with what is going to happen to them. Then true to the series there are so many mad, interesting and insane situations that take them on this other journey as well.

“All the things that Dr Timoney unearths all connect up. It’s not like we find out new information. It is all information we have heard before in previous episodes: a little bit about her dad, a bit about her mum.

“Those seeds have been planted way back earlier; that her dad was in prison, that her mum left her when she was really young. She was brought up by her dad, left to her own devices when she was about 17.

“All those things have been planted and it has just been really nice to see without realising all this stuff has been fed into the character and now we are getting the pay off.

“One of the things Dr Timoney suggests is that perhaps Louisa sets Martin challenges that he can’t possibly achieve in order for that cycle of people always leaving her to keep happening.

“You really do feel like you are in the session, and you go to the heart of what Dr Timoney is trying to tease out of both of them and you can see how difficult it is for both of them to deal with it.

“It is putting them in extreme and uncomfortable situations which makes it feel fresh.”

As the new series begins the couple’s baby son is eleven months old, which meant choosing a whole new set of babies to play James Henry to replace the newborns who starred in the last series. Caroline admits the older babies were a little more tricky to work with.

“Coming up to one year old you want to walk and you don’t want to be held, and passed around. They are much more sensitive to sounds and there is this new awareness.

After the last series of Doc Martin Caroline went straight onto film another series of the ITV drama DCI Banks. This Autumn she begins filming a comedy drama with Ben Miller for the BBC, I Want My Wife Back.
Posted by Hod at 08:00