Doc Martin review: If I was Cornish I’d be cross – why are they all portrayed as bumbly, workshy idiots? 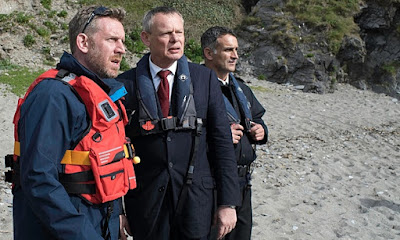 I’m only recently back from there – Cornwall, family “holiday”. Now it’s back down the M5 again, for Doc Martin (ITV). They’re very good at making it look idyllic, and for being there in glorious weather. Poldark too. Next time we go, if there is a next time (there were threats of mutiny and Spain), I’m going to time it to coincide with the filming of a popular television series.

He – Doc Martin Ellingham – wakes up alone. Actually it looks like he’s been awake for a while, thinking dark thoughts, way over on his side of the bed. At least spread out a bit man, do some starfishing, it’s one of the joys of being left alone. But joy – or starfishing – isn’t Doc Martin’s style. He’s more of a razor clam, long and straight and stiff.

Louisa has gone to Spain with little James, to escape their unsunny English husband/father, though it’s not clear whether the arrangement is a permanent one or not. There are little reminders everywhere, to make the pain worse for him – a hairbrush in the bathroom, a child’s toy to tread on. And further accidents – a dropped box of fish, a dropped shopping basket (that’s pretty much the same, isn’t it?), a bump on the head and a tumble down the stairs – are reminders that although the sit may be lovely, the com of Doc Martin isn’t the most sophisticated or subtle. Millions of viewers know better than any critic, though, and will continue to watch. To be fair, Martin Clunes is very good at stiff and alone and joyless. He carries the show, pretty much singlehandedly. Without Clunes, it’s just a series of bumps and mishaps and testical examinations (two in this episode) by the sea.


Keep reading HERE at the Guardian.
Posted by Hod at 18:27