EXCLUSIVE: Martin Clunes Talks on No. 7 for ‘Doc Martin’ 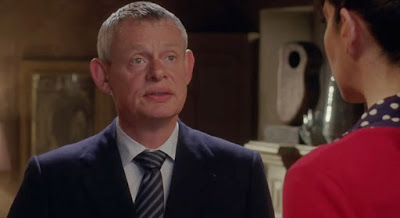 HOLLYWOOD—Martin Clunes returns as the brash yet brilliant titular village physician in Britain’s “Doc Martin.” The long-awaited seventh series (season, as it is referred to in the U.S.) of the popular medical comedy premieres Thursday, Jan. 14 at 8 p.m. on some PBS stations. In Los Angeles, it airs on KCET, a non-commercial education independent television station. American Public Television distributes the series in the U.S., and PBS stations may carry it. Visit your local station’s website for updated schedule information and other bonus content.

Clunes, 54, has been playing Dr. Martin Ellingham since the series premiered in 2004. The series airs every two years thanks to a comfortable schedule that allows the show’s writers and producers (including Clunes’ real-life wife Philippa Braithwaite) a generous amount of time to write and film the series on location in Port Isaac in Cornwall (which stands in for the fictional seaside village of Portwenn, home to colorful villagers).

As Dr. Martin Ellingham, Clunes plays a GP whose combative attitude and tactlessness regular creates mayhem in the sleepy seaside community. In the season six cliffhanger, viewers watched as Martin saw his beloved wide, Louisa (Caroline Catz) and young child leave him. Season seven season picks up with his plan to win them back.

The award-winning actor apologizes profusely by phone because a train delay has pushed back his interview time just days before Christmas.

Unlike his iconic TV character, Clunes is personable and has an easygoing manner. He laughs easily and clearly enjoys playing his curmudgeonly character.

Q: The setting for your series couldn’t be a more perfect advertisement to visit Port Isaac. I can see why you’ve been doing this 11, going on 12 years.

Clunes: (He laughs.) Yeah, until we get found out.