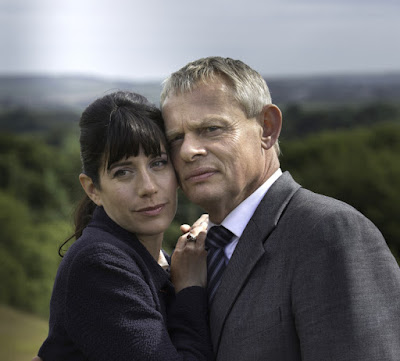 “There are lots of stories we want to explore, and we want to do them well,” series producer Philippa Braithwaite, wife of star Martin Clunes, told Current. “I think we’ll know when it’s time to end the show.”

That’s great news for fans, so crazy for the hit Britcom that they call themselves “Clunatics.”
Their passion for the quirky characters that populate the fictional English fishing village of Portwenn has catapulted the title to multiple adaptations worldwide: In Austria, there’s Der Bergdoktor; the Netherlands, Dokter Tinus.

A U.S. version for commercial TV is now in the works, from Executive Producer Marta Kauffman (Friends, Grace and Frankie).

But fans — as well as the cast and crew — are constantly playing a nervous guessing game as to when the original British series could end.

New episodes are filmed every other year from March through July in scenic Port Isaac, a sleepy burg in Cornwall. On its home network of ITV, Doc Martin remains the highest-rated Monday show outside of longtime soap operas.

Braithwaite said each season is created so that it could be the last. “We never know when we finish if we will make another” season, she said, “so we finish deliberately so we could leave it right there.”

She admitted that Season 6 was the exception. Viewers were left with an emotional cliffhanger: Martin’s frustrated wife Louisa (played by Caroline Catz) had retreated to Spain with their infant son James to visit her mother, with no planned return date. Martin was left to wonder if, given his personality quirks, he should be married at all.