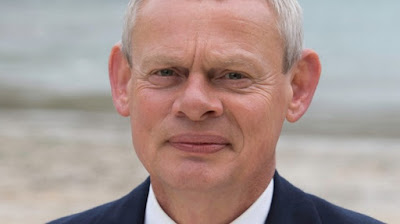 Want an idea of just how popular Doc Martin is? When the British drama about a curmudgeonly doctor in a Cornish fishing village advertised for extras in the local Port Isaac press, more than 800 people showed up.

In the giant queue, which snaked around the local church hall, there were no fewer than 150 babies in prams and pushchairs eager to be chosen for the role of the doctor's 11-month-old son, James Henry. That is one well-loved show!

Over six series, Doc Martin s has averaged nine million viewers a week in the UK and star Clunes Clunes, who plays the lovable yet grumpy medic, has won himself an army of die-hard fans. Calling themselves "Clunatics", they lavish gifts on the cast and crew to underline just how much they love the drama. "They are a group of Doc Martin fans who keep thanking us for helping them to make great friendships with other fans around the world. They Skype each other," explains Clunes, 53, who has played the role for 11 years. "When episodes go out, they have discussions on it, and when there are no episodes going out, they have more discussions. There is one woman logging all the ties I wear in the show. She says, 'I don't think I have seen this tie since season two. Mind you, I haven't logged all the season six ties yet'," says the actor, who is married to the show's producer, Philippa Braithwaite. The couple live in rural bliss in Dorset, with their teenage daughter, Emily.

We've had so many presents; paintings of myself and cast members, a fridge magnet of Jimmy, my Jack Russell, paintings of my horses. A lady from Iceland hand-knitted a sweater for me, one for Emily and one for Philippa – and one for Brian the props man because he was nice to her in the pub one night," continues Clunes.

"We were given a big jar of M&Ms with 'DM' printed on each one of them for us all. Some of the Clunatics even found us when we were filming on the moors."

Clunes, who has just spent a very contented four months shooting the latest series in Port Isaac, is touched, and a little taken aback, by the show's global popularity. "When we started making Doc Martin, we could never have imagined it would have this reaction," he says. "We never anticipated this. You can't predict how successful something will be."

As the seventh series kicks off this week, Doc Martin looks set to remain as popular as ever. Dr Martin Ellingham, the GP with the disastrous bedside manner and a morbid fear of blood, has his work cut out in the new series, set in the fictional bucolic seaside hamlet of Portwenn. Louisa (played by Caroline Catz from DCI Banks), the woman he recently married, has had enough of his grouchiness and has walked out. She has taken young James Henry and gone off to stay with her mother in Spain.