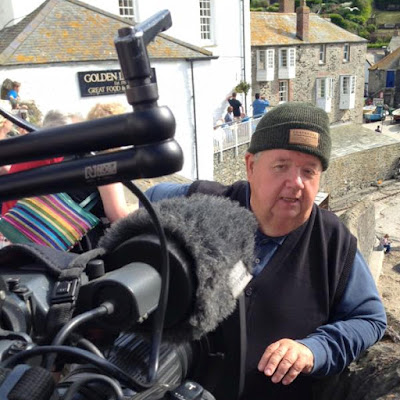 The seventh series of Doc Martin is about to complete its national premiere in the US, and fans already want to know if there will be an eighth. So I asked Ian McNeice.

Ian McNeice, aka Doc Martin‘s Bert Large, is in the US right now, at American Public Television’s Fall Marketplace, where public TV programming execs are gathered to meet him and enthuse about Doc Martin, while screening others of APT’s programs for their upcoming schedules.

We all know Ian as a fine actor, and now I can say from personal experience that he is a genuinely nice guy, too, as he was happy to chat with me by phone this morning, despite my cracking, croaky, under-the-weather voice.

Before we spoke about Doc Martin, we spent a couple minutes on the Royal Shakespeare Company’s production of The Life and Adventures of Nicholas Nickleby, which I recently re-watched and in which Ian played several roles. Here’s a bit of trivia he shared with me: As a result of the reciprocity agreement for the RSC’s troupe of 38 British actors appearing on Broadway, London’s West End got… Elizabeth Taylor in the play Little Foxes.

Then we moved straight into Doc Martin, one of the most popular British TV imports ever. With Acorn TV about to stream the finale of Doc Martin: Series 7, and public TV stations set for the broadcast premiere of the series in 2016, what I and the rest of Doc Martin fandom want to know is this: Will there be a Series 8?

“Every year that we make the series, we come to the end of the filming, and the last two weeks are all spent with the same question. All the actors ask each other, ‘Do you think we’re going to come back?’ Nobody knows… We all want to come back, but we have no idea, and it all hinges on two or three things.

“It hinges on the ratings, whether the ratings are good for ITV, and the next one is whether everyone wants to do it or not. So that really relies on whether Martin Clunes wants to do it again, whether Philippa Braithwaite and Mark Crowdy, the producers, come up with enough good script ideas. There’s a limit to how many ‘will they or won’t they get together again,’ which is a mainstay of the show.

“The good news is that, this past series has been one of the best that they’ve ever done. Everybody’s very happy with it. ITV are over the moon with it. The ratings have been terrific… And ITV is going to give us a dinner to celebrate the viewing figures.”


Keep reading HERE at The British TV Place.
Posted by Hod at 06:17