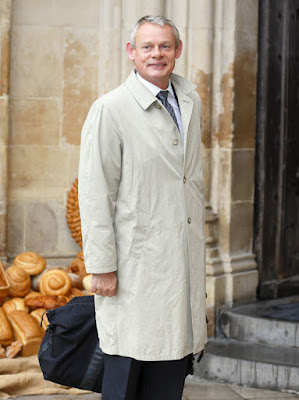 THERE were fears that it was getting axed but Doc Martin is returning for an eighth and final series, ITV has announced.


The last-ever run of the comedy drama, following the travails of Martin Clunes’ socially inept Doctor Martin Ellingham, is set to be broadcast next year.

Doc Martin star Ian McNeice, who plays Bert Large, revealed that the cast were told about series eight after they were invited to a dinner hosted by ITV.


The broadcaster held the event to celebrate the programme’s high ratings that were said to be “on a par with Downton Abbey”.

“Everybody in the cast was there and then the Head of ITV gets up and says ‘We love Doc Martin and as a vote of confidence we would like to give you one more show’,” the 65-year-old actor explained.


He continued: “The future is rosy. We would all like to do more with Martin and God bless them ITV have said they are going to do more.”

Ian also confessed that he thought at the wrap party for series seven that the show would be drawing to a close, however he was pleased when it turned out his fears were misplaced.

“We had a cast and crew photograph and we had never had that before, and it was slightly unnerving that the end of this series we wrap things up nicely. But it is not over and we are thrilled,” he told The Mirror.


Keep reading HERE at the Express.
Posted by Hod at 18:52