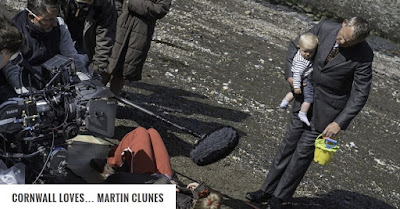 As I head to Port Isaac – an overcast spring day magically blossoms into the bright Cornish sunshine that is perhaps as much a star of hit ITV show Doc Martin as Martin Clunes in the titular role. We are in the fictional town of Port Wenn. It’s only May and the crowds are gathering to see actress Caroline Quentin on her first day filming for the new series set to air later this year.

Now filming its seventh series, the hit ITV show has become a regular visitor to the old harbour town in North Cornwall, creating havoc on its narrow twisting cobbled streets as fans roll up to watch their favourite show being made, hopeful of catching a view of the be-suited GP striding around the town scowling at his patients. The production company behind the show has even set up a special fund for the town in recognition of its starring role in the success of the show.

‘The sun always shines in Port Wenn,’ jokes Martin Clunes, as he introduces himself. The instantly familiar actor who has graced our screens for more than three decades is intimidating in the iconic ‘stuffed shirt’ that has become so familiar to fans of the erasable general practitioner Dr Martin Ellingham. ‘Part of the success of Doc Martin, is Cornwall,’ he says as I begin with the oft-asked question of the importance of the show’s location. His easy manner much more like the kind of friendly-family doctor you’d want to show your throat infection to.


Keep reading HERE at Cornwall Life.
Posted by Hod at 19:11