A tale of two TV series: Favorite shows chart the itinerary for a U.K. journey 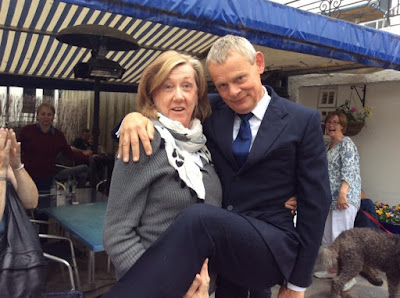 Our readers share tales of their rambles around the world.
Who: Friends Angela Hughes (the author) and Ginger Harden of Arlington.

Where, when, why: In June, we ventured to England and Wales for two weeks to visit the scenic sites of two television series: Port Isaac, Cornwall (the fictional Portwenn of “Doc Martin”), and Portmeirion, Wales, the setting for the 1960s cult classic “The Prisoner.”

“Doc Martin” is a favorite of both of ours, and Port Isaac plays a major role in the series about a London surgeon who takes over a Cornish village practice after developing a phobia about the sight of blood. The combination of eccentric villagers and Doc Martin’s curmudgeonly personality result in awkward moments. We timed the trip so it would fall during the filming of its reportedly final season.


Keep reading HERE at The Washington Post.
Posted by Hod at 19:50