3 Reasons Why We Love Doc Martin 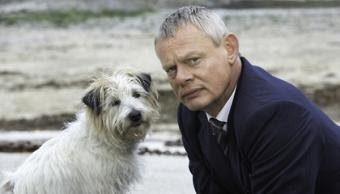 What is it about Dr. Martin Ellingham’s abrasive bedside manner and particular ways that keeps up coming back to watch his jaw dropping antics? For over a decade, Doc Martin has been a favorite not only of our viewers here at GPB but all over the world.

The reasons why we love him are countless and we’ll get to reminisce in the must see behind the scenes special “Doc Martin: Seven Grumpy Seasons” which premieres on GPB on Thursday, November 26 at 8:30 pm. In honor of this occassion, special guest Ian McNeice who plays Bert Large, will be in studio taking part in the roast of the good doctor. An appropriate exercise for Turkey Day we think!

We also thought of the answer to the first question posed in this post. There are many responses but here are 3 reasons why we love Doc Martin:

1. He’s socially awkward. In the rural English town of Portwenn, everyone is friendly and pleasant. Doc Martin on the other hand seems to have trouble assimilating with the locals...or he doesn’t want to. His sour attitude throws the townspeople off, an attitude particularly strange for a doctor; he simply cannot grasp the concept of “small talk” and his humor has a lot to be desired. In season one episode two, “Gentlemen Prefer”, Martin cracks a joke about needing 1,000 loyalty points for a free coffin - not the best way to approach a patient!

2. Despite his lack of warmth, he’s always honest. Martin might not be the most pleasant person in Portwenn, but he’ll tell it like it is for your own good. In season two episode 14, “Erotomania” for example, Martin gives Mark some bad news about his fiancee. While Mark refuses to believe that Julie is a fake, he later realizes Martin was telling the truth. Speaking of truth…

3. The good doctor does have a soft-spot. In the same episode, Martin lets his true feelings for Louise slip. Martin isn’t much of a drinker but Louise convinces him to have wine at his place. After several sips Martin proclaims, “ All I think about every day is just catching a glimpse of you.” Pretty smooth doc, until he takes it back and accuses Louise of having erotomania, the delusion that a stranger is in love with you. Ouch!