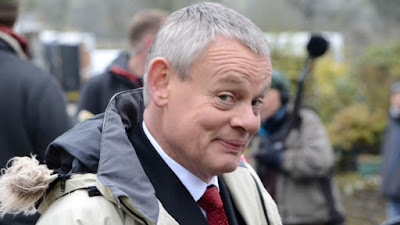 Martin Clunes is the star and co-steward of Doc Martin, the popular and personally beloved British import about a big-city doctor whose life becomes enmeshed, to his ongoing discomfort, with the people of Portwenn, a Cornish fishing village (He retreats there when a suddenly acquired fear of blood interrupts his surgical career).

It is a comedy of extreme frustration, in which Clunes' Dr. Ellingham, highly competent at his job and self-defeating in life, nevertheless manages to fall in love, with Caroline Catz's schoolteacher Louisa, have a child and marry, in that order (There are many other characters, each frustrated and frustrating in his or her own way). This has happened at a glacial pace and with many excruciating detours – a pace slowed further by the fact that, though the events of one season lead more or less straight into the events of the next, the show now appears only every other year. Martin and Louisa's son, James, born in a 2011 episode, is still a baby.

That on-off, schedule, which involves both Clunes and his producer wife, Philippa Braithwaite, has been adopted in order to not unduly disturb either the life of their daughter or that of Port Isaac (Port Wenn in the series), where the show films; its global success, which has also generated native adaptations in several other countries, has turned the town into something of a tourist destination. It's also because, Clunes says, "We'd never get the scripts in shape in any less time. It's not an easy show to write. However much time is never enough".

Though the character he plays on television is serious to a fault, Clunes himself is a cheery sort who finds amusement everywhere; indeed, he can barely speak for laughing.

That's a good question. I can tell off the page just reading it to myself when scripts come in and somebody's just gauged it wrong. Like if he apologizes, or uses the F-word – we don't go there. It sounds so wanky to say he lives, but I'm also very aware that I'm motivated by a huge desire to fall over and walk into things to make people laugh. You do get into a groove, which is great, when you get to act with the same people a lot. Like with, Caroline Catz – it's like a duet, you're like a duo jamming together.