Much the same thing....Spain? Are you sure?! 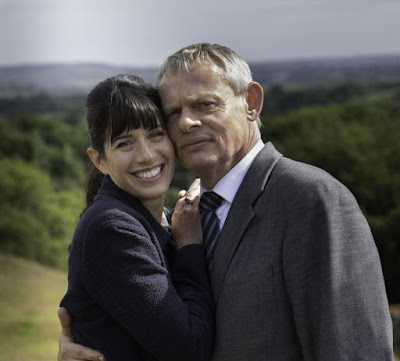 DOC Martin has been held hostage so many times, the surprise is PC Penhale hasn't engaged himself as his personal bodyguard.

Tonight he's back in the clutches of yet another crazed villager. Although, handily for the last episode of the series, having time to himself, albeit unwanted, does give him an opportunity to reflect on his and Louisa's future. A moment of realisation he undergoes at the end of every season, before the next one starts, amidst thudding inevitability, with the couple right back at the beginning.

As it stands, Louisa is supposed to be leaving for Spain. Soon, however, she is amidst a rescue party of villagers hellbent on setting the, er, much-loved, Doc free.

It's strange to think that Martin Clunes is now more well-known for Doc Martin than he would be for, say, Men Behaving Badly. Crazy. Anyway, the finale in the series sees Louisa worrying about Dr Timoney's suggestion that she and Martin aren't meant to be together might have prompted him to leave Portwenn for good. Calling on Ruth, Morwenna and Janice for help, she tries to track the down the missing GP, with no luck. However, what Dr Ellingham's friends and family fail to realise is that he is actually trapped up at the Winton farm, where desperate wife Annie is trying to coerce him into performing a life-saving operation on her terminally ill husband Jim. Meanwhile, Ruth and Bert seek out Al to offer him a proposition regarding the whisky and the B&B