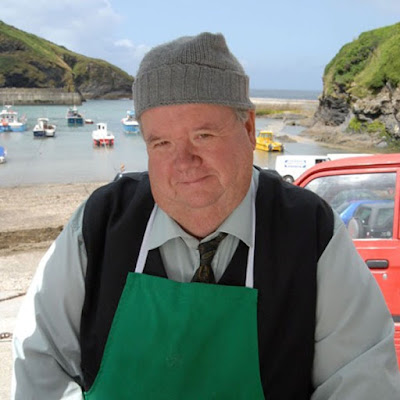 Who says keeping your fingers crossed doesn’t work? It certainly has for Doc Martin fans, as series costar Ian McNeice has confirmed that more of the hit dramedy is coming!

Ian McNeice was back in the US this past Monday, as the special guest for the KCET sneak peek of Doc Martin: Season 7 and station fundraiser, held at the residence of British Consul General Chris O’Connor in Los Angeles.

Since I couldn’t be there in person (yes, I sobbed into my tea at having to decline the invitation), KCET kindly arranged a phone interview with Ian for me. My fingers were crossed that he would have good news about Doc Martin, and did he ever!

If you’ve read my earlier interview with him, you’ll recall that Ian calls farmer Robert (whose warehouse is home for the Doc Martin sets) around this time of year about whether he has a job portraying Bert Large for another season. So my first question for Ian this time was, “Have you called the farmer yet?” He replied:

“Instead of calling the farmer, I was actually just able to tell the farmer something…
“It was at Christmastime I got an email from Philippa, the producer, to say that ITV, the company that makes [Doc Martin], wanted to take us out to dinner. Everybody. So that included all the cast, all the heads of departments… We had a very swanky dinner in a big hotel in London, and we were all thinking, ‘This is gonna be it. This is gonna be over. It’s all going to end.'”

But the head of ITV gave the gathering a bit of brilliant news, indeed. The network was commissioning more Doc Martin. As Ian exclaimed during our chat: